By all rational logic, Steph Curry should be a Nike athlete today. He should have signed with Nike a decade ago just as he was starting to lead the perennially-mediocre Golden State Warriors to championship-contention status. Pardon the pun, but this deal was the biggest layup ever Nike.

What kind of shoes did Steph wear in college? Nike.

What kind of shoes did Steph’s dad Dell Curry wear at the end of his NBA career? Nike.

What kind of shoes did Steph wear in his first few years in the NBA? Nike.

Where did Steph’s godfather work right when he was becoming a rising star in the league? Nike.

So what company did Steph sign with in 2013 when he was in need of a new shoe contract?

And what company is about to pay Steph $1 billion to wear its products for the rest of his life? Once again, Under Armour.

As we stated previously, following all rational standards Steph Curry should be a Nike athlete right now. His current Under Armour contract expires in 2024. If the rumors are true, Steph Curry will be wearing Under Armour until… he expires. And it’s all thanks to one horrendously botched presentation at the Nike corporate campus back in 2013. 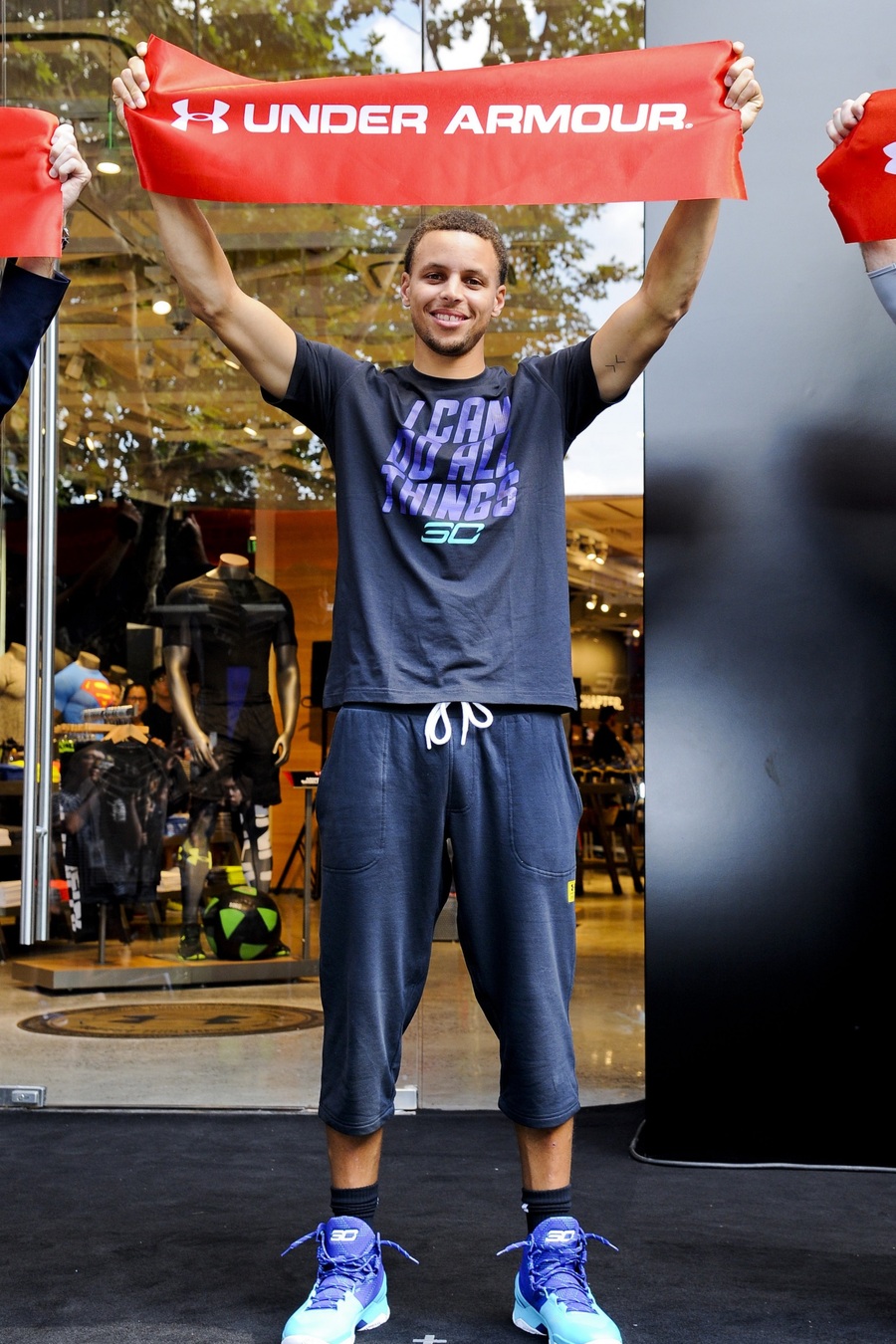 After being drafted as the seventh pick in the first round of the 2009 draft, Steph Curry’s first few years in the NBA were dogged by leg injuries. He spent those first few frustrating years wearing Nikes under a deal that expired after the 2013 season.

In 2013 Steph Curry led the Warriors to the Western Conference semifinals. The team’s best showing in years.

Riding this wave and the perfect timing of his deal being up, Steph and his team (his dad) went knocking on Nike’s door with the hope/assumption that they could secure a long-term, lucrative endorsement partnership. After all, Steph was a rising star, he wore Nikes already, their deal was up, his father had relationships with the company and his godfather was a Nike executive. To sweeten the deal, Steph was eager to run a Nike-sponsored up-and-comers camp like the one he attended years earlier which was led by Nike athlete Chris Paul and dramatically improved his game and confidence.

What should have been the easiest layup of all time for Nike ended in disaster.

First off, instead of sending a senior member of company management… or perhaps even the CEO… Nike offended the Currys by sending a mid-level marketing director to make its pitch.

Secondly, in the meeting Nike expressed hesitation in its desire to have Steph lead a camp. They weren’t sure he had the star power they were wanted. Nike ultimately tapped Kyrie Irving and Anthony Davis to lead its camps that summer.

But Nike’s biggest sins came during the actual pitch.

First off, one of the Nike executives in the room kept referring to Steph as “Steph-on,” like the way you would pronounce “Stephon Marbury”. The proper pronunciation is “Steph-en.” Not “Steven,” but Stephen, as in rhymes with “effen”. Somehow the mistake wasn’t corrected even after the ill-prepared Nike exec made it over and over during the pitch. This really annoyed Dell Curry.

As they were going through the deck, it became clear that the slides that were supposedly a custom pitch for Stephen Curry, actually had been recycled from another pitch they had delivered previously. How did they know? Because one of the slides literally had Kevin Durant’s name all over. It was a cut and pasted.

That was the straw that broke the camel’s back. When they walked off of Nike’s campus, Dell told a dejected Steph:

“Don’t be afraid to try something new.”

Whatever Steph decided, there was a catch. Nike did offer a contract that would have paid $2 million per season, a substantial amount considering at a time when he was only making around $3 million from NBA salary. More importantly Nike also had the right to match any competing offer Steph received.

Under Armour Swoops In

When Under Armour got word that Steph Curry was in play, the company began sending boxes and boxes of free stuff not just to Steph, but to the entire Warriors organization. This planted a seed.

Next, Under Armour tapped a Warrior who was already under their banner, Kent Bazemore. Over late night shooting drills, Kent laid out the pitch. At Nike Steph would be one of a hundred company players. One rung on the ladder. With Under Armour, Steph would be the ladder. Not only the face and star of his own shoe line (which Nike was also not offering), but the face and star of the entire company.

Kent Bazemore wasn’t just doing this to win points with the execs at Under Armour. He believed in the company. After going undrafted and being passed over by Nike himself, Under Armour gave Bazemore a deal that paid six-figures every year at a time when his NBA salary was only around $400,000.

Steph was convinced. But there was the matter of Nike’s ability to match any offer.

Under Armour doubled Nike’s offer with a contract that would pay $4 million in the first year. Nike probably could have found the difference – $2 million – in the cushions of their couches. But somehow, Nike walked away.

Two years later, in 2015, Steph and the Warriors won the NBA Championship. In the off season, Steph signed an extension that instantly upped his annual Under Armour salary from $4 million to $10 million and more recently to $20 million. The extension also kept him with the company through 2024.

Fast forward to the present and Steph Curry is about to sign a $1 billion lifetime deal with Under Armour. A deal that will far outweigh all the money Steph has earned so far in his career from NBA salary and endorsements outside of Under Armour. A deal hat should never have existed in the first place under all rational circumstances.

Congrats to Steph and to everyone else reading this – CHECK YOUR POWER POINT SLIDES BEFORE YOU PRESENT! The Baltimore Ravens came into the season feeling good about their title chances. They had offensive MVP Lamar Jackson on their side, an impressive defense, and several players and coaches who had seen postseason success. But Jackson struggled with injuries and though the Ravens made the playoffs, they lost in the divisional round — to… This whole offseason, rumors swirled around San Francisco 49ers quarterback Jimmy Garoppolo. Despite a Super Bowl appearance three seasons ago and a trip to the NFC Championship Game last year, the team was ready to move on to Trey Lance, a speedy quarterback with a strong arm. As the summer came and went, Garoppolo didn’t… If you were to ask anyone what the most important position on a football field is, the response would almost always come back the same: it’s the quarterback. It makes sense — aside from the center, they’re the only ones touching the ball on every offensive play. There are also numerous NFL rules designed with…