What is Noam Chomsky’s Net Worth?

Noam Chomsky is an American philosopher, linguist, social critic, cognitive scientist, and prominent anarcho-syndicalist thinker who has a net worth of $500 thousand. To date, Noam Chomsky has authored over 150 books. He first rose to national public attention in 1967 for his anti-Vietnam War essay “The Responsibility of Intellectuals,” and since then, has become one of the most renowned and cited of all living scholars. After teaching for several decades at MIT, Chomsky became Laureate Professor of Linguistics at the University of Arizona.

Chomsky holds dozens of honorary degrees from universities around the world, including Columbia University, Harvard University, and the University of Cambridge. He has won numerous global awards. He is a passionate defender of freedom of speech, especially for the media, and frequently criticizes the foreign policy decisions of the United States.

Noam Chomsky was born as Avram Noam Chomsky on December 7, 1928 in Philadelphia, Pennsylvania to Jewish immigrants William and Elsie. He had a younger brother named David. As a youth, Chomsky went to Deweyite Oak Lane Country Day School, and then to Central High School. Additionally, he attended Hebrew High School at Gratz College, where his dad taught. Chomsky became acquainted at an early age with the far-left politics for which he would become known. He was significantly influenced by his relatives who were involved in the International Ladies’ Garment Workers’ Union; moreover, he often visited leftist and anarchist bookstores, identifying as an anarchist as early as age 12.

When he was just 16, Chomsky enrolled at the University of Pennsylvania, where he studied philosophy and languages. During this time, he became inspired by linguist Zellig Harris, whom he met in a political circle; it was Harris who convinced him to enter the field of theoretical linguistics. Chomsky went on to earn his BA, and then his MA and PhD, from Pennsylvania. His thesis explored transformational grammar.

In 1955, Chomsky became an assistant professor at MIT. Two years later, he was promoted to an associate professor; he also taught as a visiting professor at Columbia University. Moreover, Chomsky published his first book on linguistics, entitled “Syntactic Structures.” From 1958 to 1959, he served as a National Science Foundation fellow at the Institute for Advanced Study in Princeton, New Jersey. Chomsky continued to make waves in the academic community with his critical 1959 review of B. F. Skinner’s book “Verbal Behavior.” He went on to co-found MIT’s linguistics graduate program with fellow linguist Morris Halle. In 1961, Chomsky became a tenured full professor at the school. Throughout the decade, he published a number of books on linguistics, including “Aspects of the Theory of Syntax” and “Cartesian Linguistics: A Chapter in the History of Rationalist Thought.”

In the 60s, Chomsky was an outspoken critic of the Vietnam War, and participated in numerous protests throughout the country. He also penned an anti-war essay in the New York Review of Books entitled “The Responsibility of Intellectuals,” which gained him a great deal of public recognition. Along with his other political articles, the essay was published in his 1969 book “American Power and the New Mandarins.” This was followed by a string of further political books such as “At War with Asia,” “The Backroom Boys,” “Peace in the Middle East?,” and “Counter-Revolutionary Violence: Bloodbaths in Fact & Propaganda,” which he co-wrote with scholar Edward S. Herman. Among his many other activist endeavors, Chomsky co-founded the non-profit anti-war collective RESIST.

Following the end of the Vietnam War, Chomsky continued to vehemently denounce the United States’ involvement in international affairs, including the Nicaraguan Contra War and the Israeli-Palestinian conflict. Later, in the early 2000s, he was forceful in his condemnation of the Iraq War and the concomitant War on Terror. Chomsky continues to criticize the US for its imperialism, hawkish foreign policies, and mercenary capitalism. 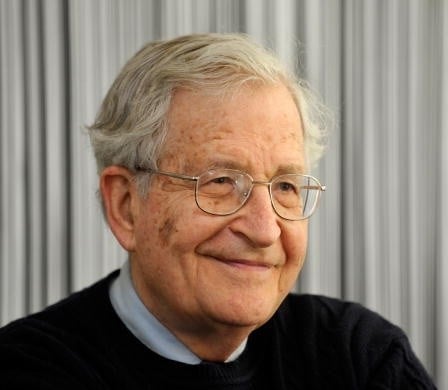 Chomsky’s status as a pioneering linguist continued to grow throughout the 70s and 80s. He continued to develop his work in the field of biolinguistics, arguing that language is genetically inherited and unique to the human species. Additionally, he added substantially to the area of transformational-generative grammar, and was central in the creation of the theory of universal grammar. Chomsky earned multiple honorary doctorate degrees for his work, and delivered public lectures at such schools as the University of Cambridge and Stanford University. He also released such linguistics books as “Studies on Semantics in Generative Grammar” and “Reflections on Language.”

Among the other academic fields in which Chomsky has been active are various philosophies, including philosophy of the mind and philosophy of science. Notably, he is credited with precipitating the “cognitive revolution,” the genesis of cognitive science that repudiates the theory of logical positivism. Chomsky posits the rationalist notion that the mind contains inherent structures to understand language and thought, a concept that stands in opposition to the common 20th-century form of structural linguistics.

In 2002, Chomsky retired from MIT. His next teaching position came 15 years later in 2007, when he began teaching a course in politics at the University of Arizona. Chomsky was eventually hired as a part-time professor in the school’s linguistics department.