What was Mohammad Reza Pahlavi’s Net Worth?

During his reign, Iran underwent rapid industrial and military modernization, and experienced sweeping social, economic, and political reforms. Due to mounting civil unrest over the Shah’s authoritarian rule – including the massacre of protestors by his military – he and the Iranian monarchy were overthrown and ultimately abolished.

As the Shah of a country with one of the largest sources of oil on the planet, Mohammad Reza Pahlavi was certainly enriched through income generated by the state-owned, National Iranian Oil Company. In one month in 1962 alone, the National Iranian Oil Company paid $12 million in dividends to an account controlled by the Shah. That’s the same as $117 million in today’s dollars. And that’s ONE MONTH in 1962.

The Shah of Iran’s Personal Wealth

At the time he fled Iran in 1979, the Shah and his extended family brought an estimated $4 billion in wealth to the countries where they settled. It is estimated that the Shah personally controlled $1 billion of that $4 billion, most of which was held in Swiss bank accounts. Dissidents at the time of his ouster provided an accounting of some of the Shah’s most important personal assets. Those assets included majority equity stakes in:

Outside of Iran the Shah owned 25% in a German steel company called Knipp among other personal real estate and other investments.

All of these assets were reportedly controlled by an entity called the Pahlavi Foundation. That foundation famously refused to disclose the value of its assets or estimated annual income. In 1979 when an official at the foundation was asked directly for estimates of the values of the organization’s assets, he infamously replied:

Mohammad Reza Pahlavi was born on October 26, 1919 in Tehran, Qajar Iran to Reza Khan and his second wife Tâdj ol-Molouk. His father went on to become Reza Shah Pahlavi, the first Shah of the House of Pahlavi of the Imperial State of Iran. Mohammad Reza was the third of his 11 children; he had a twin sister named Ashraf. Growing up, he was negatively impacted by his father’s authoritarian ways, and often criticized him behind his back. Mohammad Reza had healthier influences in his mother and sisters, who gave him the emotional support he lacked from his father. Unfortunately, he was eventually taken away from them to be given an education by military officers his father had handpicked. Mohammad Reza subsequently went to the Swiss boarding school Institut Le Rosey, where he played football and learned French. Returning to Iran, he was enrolled at a military academy in Tehran.

During World War II in 1941, Nazi Germany invaded the Soviet Union; this caused tensions with Iran, which had so far been neutral in the conflict. Later in the year, when British and Soviet forces invaded Iran, Reza Shah was deposed and the Iranian military collapsed. Consequently, Mohammad Reza replaced his father as the next Shah. He had notably low self-esteem early in his reign, and spent the majority of his time writing French poetry with his friend Ernest Perron. Meanwhile, he communicated via letters with his father, who was now in exile.

In the early 50s, the British-owned oil industry became nationalized by new Iranian Prime Minister Mohammad Mosaddegh. However, not long after this, a military coup d’état launched by the US and the UK deposed Mosaddegh, leading to the reinstallment of the Shah. Through the subsequent Consortium Agreement of 1954, foreign oil firms were brought back, and the Shah went on to become a major figure in OPEC. His influence prompted a massive surge in oil prices that substantially hobbled economies in the West.

Following the 1953 coup, Mohammad Reza became intent on proving himself an indomitable leader who could restore Iran to its former glory. This ultimately led to the introduction of the White Revolution in 1963, a series of far-ranging social, economic, and political reforms aimed at making Iran into a major global power. Mohammad Reza wished to significantly modernize the country by nationalizing key industries and land redistribution. He made massive investments in infrastructure; provided land grants and subsidies to peasant populations; introduced profit sharing for industrial laborers; oversaw the construction of nuclear facilities; and launched successful literacy programs. Additionally, Mohammad Reza issued tariffs and preferential loans to Iranian businesses, creating a new industrialist class that contributed to the manufacturing of automobiles, appliances, and other goods. 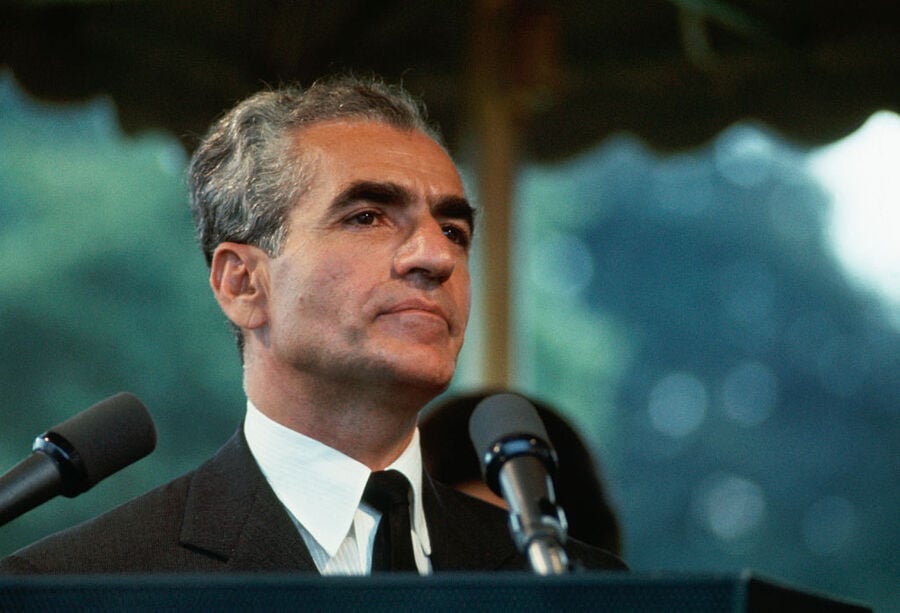 Reign as Shah in the 70s

Due to his many sweeping reforms, Iran experienced sustained economic growth that transformed it into one of the fastest-growing economies in the world in the 70s. With billions spent on industry, healthcare, education, and the military, the country surpassed the US, the UK, and France in economic growth rates, with national income rising 423 times over. enjoyed economic growth rates exceeding the United States, Britain, and France. National income rose 423 times over. Moreover, Iran grew into the fifth-strongest military in the world by 1977. For Mohammad Reza, this meant an end to foreign intervention in the country.

Despite his political achievements, civil unrest began mounting in Iran in the late 70s. Disorder was further exacerbated by the Jaleh Square massacre, in which Mohammad Reza’s military slaughtered and wounded dozens of protestors, and the Cinema Rex fire, in which arsonists killed hundreds. Amidst the Revolution in early 1979, Mohammad Reza and the Iranian monarchy were overthrown, and Reza went into exile. Not long after this, the Iranian monarchy was formally abolished, and the new Islamic Republic of Iran was led by Ayatollah Khomeini.

In 1939, Mohammad Reza married his first wife, Princess Fawzia of Egypt; a marriage of political convenience, it was intended to foster a strong bond between Iran and Egypt. The couple had a daughter named Shahnaz before divorcing in 1948 after years of unhappiness and Mohammad’s serial infidelity. Mohammad Reza wed his second wife, Soraya Esfandiary-Bakhtiary, in 1951. The two were unhappy together, and divorced in 1958. The year after that, Mohammad Reza married Farah Diba, with whom he was with until his passing. They had four children together: Reza, Farahnaz, Ali, and Leila.

Mohammad Reza was diagnosed with lymphocytic leukemia in 1974, although this was not disclosed to him until 1978. After living in exile in various places in early 1979 and visiting many different countries for treatment, he ended up in Cairo, Egypt. While undergoing a splenectomy there, Mohammad Reza suffered an injury to his pancreas; this resulted in an infection that led to his death on July 27, 1980. What was Prince Anthony Radziwiłł’s Net Worth? Anthony Stanislas Radziwill was a television executive, philanthropist and heir who had a net worth of $50 million at the time of his death in 1999. As a member of the noble Radziwills of Eastern Europe, he was technically a holder of the title of “His Serene Highness,… What was Princess Diana’s Net Worth? Princess Diana was a British princess and philanthropist who had a net worth of $25 million at the time of her death at the age of 36. Diana Spencer’s (a.k.a. Princess Diana) “fairytale” wedding to Prince Charles of England made her popular with people the world over. Her gentle…