What is John Kasich’s Net Worth?

John Kasich is an American politician and former television host who has a net worth of $10 million. Kasich served as a member of the Ohio Senate from the 15th district from 1979 to 1982. From 1983 to 2001 he served as a member of the U.S House of Representatives from Ohio’s 12th district and from 1995 to 2001 he served as Chairman of the House Budget Committee. Kasich became the 69th Governor of Ohio in 2011.

He has worked as a commentator on the Fox News Channel and hosted the television series Heartland with John Kasich from 2001 to 2007. Kasich has also worked in the private sector as an investment banker and a managing director at Lehman Brothers.

In both 2000 and 2016, Kasich unsuccessfully ran for the Republican presidential nomination.

John Kasich was born on May 13, 1952 in McKees Rocks, Pennsylvania to John Sr. and Anne. His father was of Czech ancestry while his mother was of Croatian heritage. For his higher education, Kasich moved to Columbus, Ohio to attend the Ohio State University, from which he graduated in 1974 with a BA in political science.

Following his graduation from OSU, Kasich worked as a researcher for the Ohio Legislative Service Commission. He subsequently worked as an administrative assistant to state senator Buz Lukens from 1975 to 1978. After that, Kasich decided to run for Ohio State Senate against Democratic incumbent Robert O’Shaughnessy. He ultimately won the election, representing Ohio’s 15th senatorial district for four years.

US House of Representatives

In 1982, Kasich ran for Congress representing Ohio’s 12th congressional district. He went on to defeat Democratic incumbent Bob Shamansky in the general election. Kasich won reelection eight more times after that, serving in the House of Representatives from 1983 to 2001. For 18 years during his tenure, he served on the House Armed Services Committee, where he developed a reputation as a hawk. In 1993, Kasich became the ranking Republican member of the House Budget Committee, and proposed his own health care reform plan to counter President Clinton’s. After Republicans regained control of Congress in 1994, Kasich became chair of the House Budget Committee; in that role, he introduced a welfare reform bill that was signed into law. Later, in 1997, he was the primary architect of the Balanced Budget Act. The year after that, Kasich voted to impeach Clinton.

John Kasich announced his candidacy for governor of Ohio in 2009; he went on to defeat Democratic incumbent Ted Strickland in the 2010 election. Kasich was reelected in 2014, defeating Democrat Ed FitzGerald. He served until the end of his term in 2018. 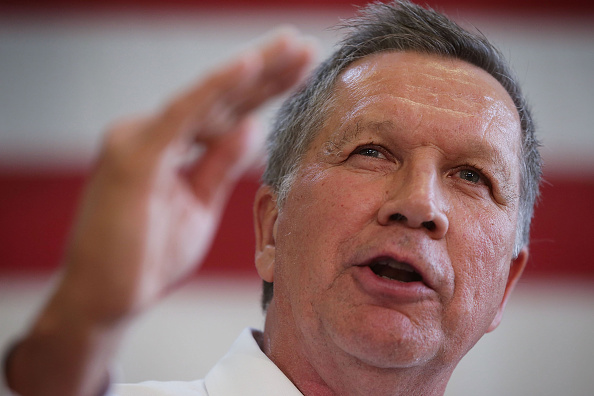 Kasich first sought the Republican nomination for president in the 2000 presidential election. However, due to inadequate fundraising, he dropped out of the race in the summer of 1999. He returned to the presidential race in 2016, positioning himself as a good-hearted and experienced alternative to the extremism and inexperience of his rival Donald Trump. Ultimately, with his campaign floundering, Kasich dropped out of the race.

Beyond his roles in the government, Kasich has done a good deal of work in the private sector. From 2001 to 2007, he hosted his own Fox News Channel show, “Heartland with John Kasich.” He also occasionally filled in for Bill O’Reilly as host of “The O’Reilly Factor.” Additionally, Kasich has served on the boards of many companies, including Norvax and Invacare. Among his other positions, he served as a managing director of the investment banking division at Lehman Brothers, where he remained until the firm’s bankruptcy in 2008.

Kasich is considered to be a semi-moderate Republican who rejects the extremism of the far-right but still remains firmly conservative. As with other GOP members, he opposes abortion and LGBTQ rights, and has been involved in many efforts to despoil the environment, including through the Keystone XL oil pipeline. He has also supported numerous unpopular foreign policies, such as the invasion of Iraq and the US drone program. Kasich is more mixed on other issues. Although he voted for the Federal Assault Weapons Ban in 1994, he voted against the Brady Handgun Violence Prevention Act, and signed a number of bills as governor making it easier for Ohio citizens to access firearms. On the topic of immigration, Kasich supports an easier path to citizenship for undocumented migrants. In 2020, he endorsed Joe Biden for president.

In 1975, Kasich married Mary Lee Griffith; the pair divorced in 1980. Later, in 1997, Kasich wed business executive Karen Waldbillig, with whom he has twin daughters named Reese and Emma.

Although he was raised in the Roman Catholic faith, Kasich started to embrace Anglicanism after his parents were killed by a drunk driver in a car crash in 1987. He is a member of the conservative Anglican church St. Augustine’s in Westerville, Ohio.