This whole offseason, rumors swirled around San Francisco 49ers quarterback Jimmy Garoppolo. Despite a Super Bowl appearance three seasons ago and a trip to the NFC Championship Game last year, the team was ready to move on to Trey Lance, a speedy quarterback with a strong arm.

As the summer came and went, Garoppolo didn’t receive much interest from other teams. So, the Niners re-signed him, but with a pay cut; Garoppolo’s base salary went from $24 million to $6.5 million.

Now, thanks to an injury, he can earn up to $16 million this year. 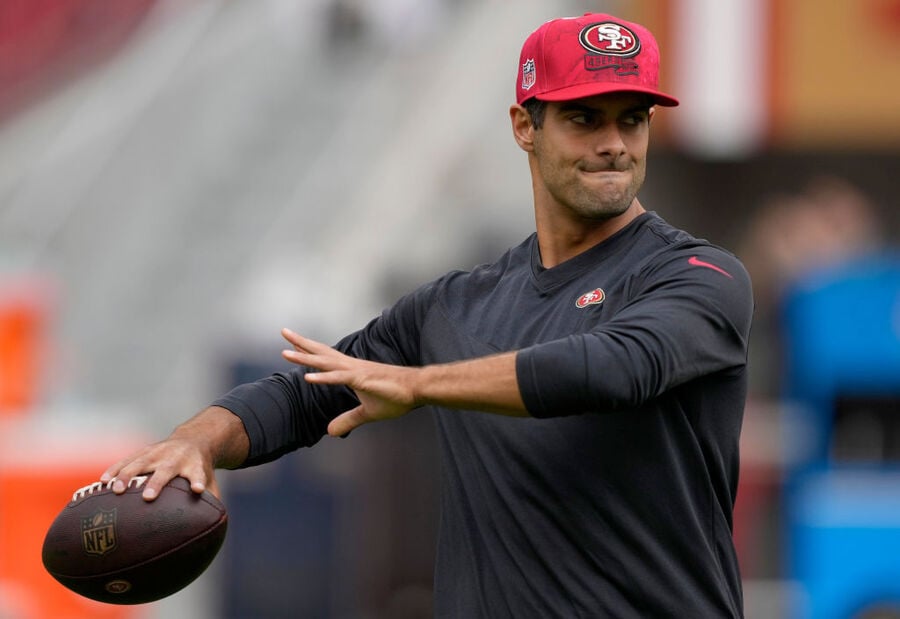 In the first quarter of San Franciso’s Week 2 game, Lance broke his ankle. The injury will require season-ending surgery, so Lance is on the shelf just five quarters into his first year as the starter. And that means Garoppolo will step back into the familiar role as the Niners’ first-string quarterback.

That would be a pretty nice consolation prize for his pay cut, though Garoppolo is sympathetic towards Lance’s situation. Garoppolo tore his ACL in September 2018, undergoing a lengthy rehab process to get back on the field. It’s the latest tough blow for Lance, who has already experienced multiple injuries despite limited playing time throughout his career. In his first start, he sprained his left knee, and he broke a finger in a preseason game.

Lance’s propensity for getting injured was a key factor in the Niners re-signing Garoppolo. And now, the starter-turned-backup will be back in a familiar role for the rest of the season.

After years of coming close to a title, it would be quite the storybook ending for Garoppolo to win the Super Bowl in a season where he began as a backup. But that’s a long way off. In the meantime, Garoppolo is focused on helping the Niners win. After all, each victory is extra money in his pocket. Last winter, the New York Yankees offered Aaron Judge a hefty contract. The deal was worth $213.5 million over seven seasons. An average of $30.5 million per year to play in New York City? Not a bad gig. Amazingly, Judge turned it down. At the time, it seemed like it could have been a silly… By all rational logic, Steph Curry should be a Nike athlete today. He should have signed with Nike a decade ago just as he was starting to lead the perennially-mediocre Golden State Warriors to championship-contention status. Pardon the pun, but this deal was the biggest layup ever Nike. What kind of shoes did Steph wear… Phoenix Suns and Mercury owner Robert Sarver announced earlier this year that he was planning to sell his stake in the teams. The NBA had recently suspended him for one year and fined him $10 million after allegations of racism and inappropriate workplace behavior. About three months later, it seems Sarver has already found a…

The MLB offseason is always a fascinating event. We get to see players switching teams, fanbases getting their hopes up for the coming year, and the market reacting in real time to everything that’s happening throughout the league. One of the players who’s making a roster change is Trea Turner. The former Los Angeles Dodgers… Blake Bortles last played in an NFL game in 2019, signing with four different teams since that last appearance. Even though he’s only 30 years old, Bortles has decided to hang up his cleats, announcing his retirement on the Pardon My Take podcast. It marks the end of a career that had plenty of ups… There’s often an argument in sports that you need to spend money to have success. But that doesn’t always hold up, especially in baseball. The Tampa Bay Rays regularly make the playoffs despite a roster that’s typically on the lower end of total salary. The Kansas City Royals won the 2015 World Series with the…