Dennis Tito, who is dubbed the world’s first space tourist is an American engineer and entrepreneur. He became the first space tourist who funded his own trip into space and spent nearly 8 days in orbit as a crew member of ISS EP-1. Tito is currently working with Elon Musk’s SpaceX to plan a weeklong trip to the moon along with his wife, Akiko. As of 2022, Dennis Tito net worth is roughly around $1 billion.

Dennis Tito was born on August 8, 1940, in Queens, New York City. He studied at Forest Hills High School. Then, he attended New York University where he earned a Bachelor of Science degree in Astronautics and Aeronautics. He continued his study and earned a Master of Science degree in Engineering Science from the Rensselaer Polytechnic Institute satellite campus.

In the 1990s, he was hired by the LA Department of Water and Power Board of Commissioners. Dennis was then accepted as a candidate for a commercial spaceflight by the Russian Federal Space Agency in the first project arranged by MirCorp. However, he faced criticism from NASA and Daniel Goldin who found it inappropriate for a tourist to take a ride into space. He eventually arrived for additional training at the Johnson Space Center on the American portion of the ISS.

Tito later joined the Soyuz TM-32 mission through an arrangement with a space tourism company, Space Adventures Ltd. The mission was launched on April 28, 2001. Dennis and his fellow cosmonaut then spent 7 days, 22 hours, and 4 minutes in space, where they orbited the Earth 128 times. At that time, he performed several scientific experiments in orbit that he claimed were useful for his business and company.

Dennis reportedly paid $20 million for his space trip. After returning from space, he testified at the Senate Committee on Commerce, Science, and Transportation. He also testified at the House Committee on Science and Space & Aeronautics Joint Hearing on Commercial Human Spaceflight on July 24, 2003. After a decade of his flight, he appeared for an interview with BBC News about the first space flight.

Tito stated in February 2013 that he intended to send a privately financed spaceflight to Mars by 2018. He further stated that the technology is already in place for a 501-day trip. Nevertheless, Tito and other team members admitted that their plan was impossible without a significant level of funding and assistance from NASA. On October 12, 2022, Tito and his wife, Akiko were announced as the crew of the second commercial spaceflight of Starshi by SpaceX. 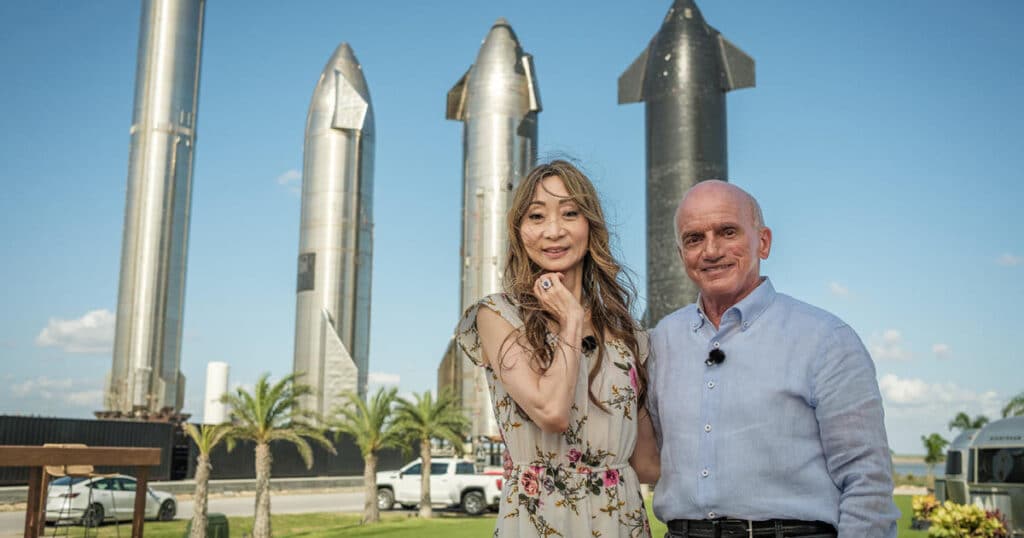 Dennis Tito is married to his wife, Akiko Tito. He and his beloved wife are currently working on a weeklong trip to the moon with Elon Musk’s SpaceX. While talking to CBS News, the 82-year-old Tito said that he hopes to blast off with his wife and other 10 daring participants for a journey that will bring them within 125 miles of the moon.

Tito further revealed that he and his wife have to wait for a long time as they are not going to fly next year. The rocket needs to get tested backward and forwards and there’ll be hundreds of flights before they’re flying. Nevertheless, Tito hopes that his next trip will occur in the next five years though it is still a ways away.

Dennis Tito’s personal wealth is estimated to be around $1 billion as of 2022. He has accumulated a colossal amount from running his financial firm, Wilshire Associates. The company provides advice for $1 trillion worth of pension funds through its Wilshire 5000 stock index and directly manages $71 billion in client assets. Bella Weems Lambert is an American entrepreneur and YouTube personality. She is famous for her YouTube channel DELLA VLOGS, which she runs along with her husband Dallin Lambert. Bella is also the founder of Origami Owl Custom Jewelry. As of 2022, Bella Lambert net worth is estimated to be around $50 million. Full Name Bella…

Tony Blevins is an American tech executive who served as a Vice President of procurement in a multinational technology company, Apple. He was fired from a high-ranking Vice president job after a viral TikTok video showed him joking about fondling big-breasted women for a living. Tony Blevins net worth is not available and is under… Stormi Steele is an American beauty expert, salon owner, and successful hairstylist. She is best known as the founder and CEO of the Canvas Beauty brand. Stormi booked nearly $20 million in sales last year. Stormi Steele net worth is not available and is under review at the moment. Full Name Stormi Steele Birth Year/… Rainer Schaller is a German businessman and entrepreneur. He is the founder and CEO of the RSG Group, which includes the Gold’s Gym fitness studios, the McFit, and John Reed. Schaller alongside his family is missing after their plane crashed off of Costa Rica on Friday, October 21. As of 2022, Rainer Schaller net worth… Billy Evans is an American businessman and entrepreneur. He is best known as the husband of Theranos founder, Elizabeth Holmes. Billy is a 29 years old hospitality heir whose family has been involved in the Evans Hotel Group since 1953. He has previously worked for the self-driving car company, Luminar Technologies, and LinkedIn. As of…