If you were born in England in 1980, by your 27th birthday you had only ever known three Prime Ministers: Margaret Thatcher, John Major and Tony Blair. And, obviously, during those 27 years you only lived under the reign of Queen Elizabeth.

If you were born in England in July 2022, you’ve already lived under the reigns of TWO royal monarchs and in the coming days you will live to see your THIRD Prime Minister. This hypothetical person has been alive for less than four months.

As you may have heard, Liz Truss resigned as Prime Minister last week after a record-setting 44 days. She replaced Boris Johnson who stepped down in July amid a wave of scandals.

Nothing has been finalized, and I’m not going to get into the details of how PMs are elected after a resignation, but as I type this article, the clear front runner is a guy named Rishi Sunak. On Sunday afternoon England time, odds makers have pegged Sunak’s chances at 75%. My understanding is that we’ll know the final outcome sometime Monday.

If Rishi Sunak becomes the U.K.’s next Prime Minister a fairly stunning circumstance will exist for the first time:

For the first time in British history the Prime Minister will actually be richer than the sitting monarch. 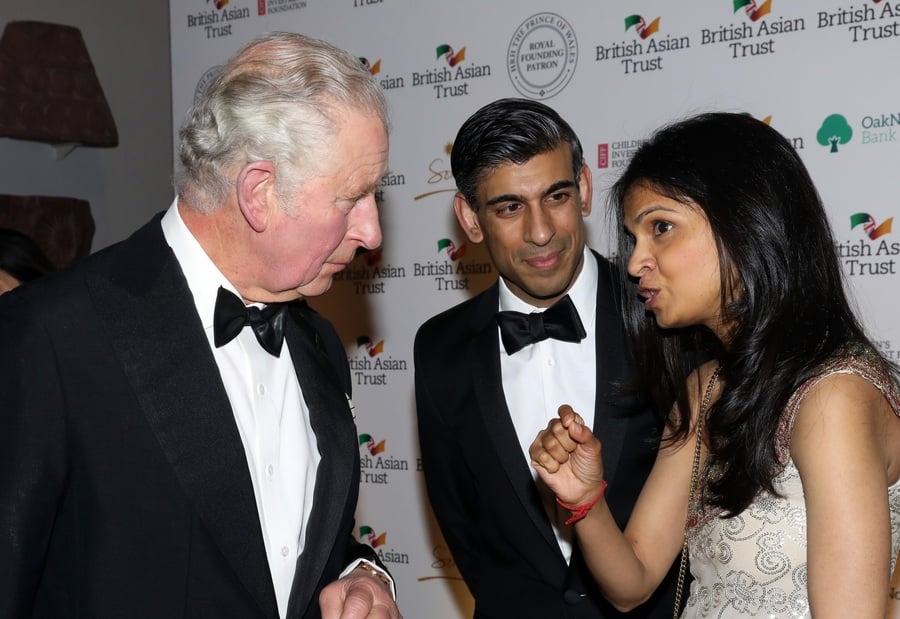 Rishi Sunak’s net worth is $800 million. And while he did have a career in finance that includes a stint at Goldman Sachs and several hedge funds, Rishi earned his fortune the old fashioned way: He married the daughter of a multi-billionaire.

Rishi was born in May 1980. He graduated from Lincoln College, Oxford in 2001. In 2006 he was accepted into the MBA program at Stanford University. One of his fellow grad students at Stanford was an young woman named Akshata Murty.

Born in April 1980 in India, Akshata is one of two children born to N.R. Narayana Murthy (the father spells his last name “Murthy” as opposed to “Murty” this may be a cultural feature).

N.R. Narayana Murthy is the founder of India’s second-largest IT company, Infosys. The publicly traded Infosys (NYSE: “INFY”) generates $16 billion in revenue per year, $4 billion in profits and currently has a market cap approaching $80 billion.

N.R. Murthy has a net worth of $4.6 billion, which makes him the 15th richest person in India today.

Rishi and Akshata married in 2009 and today have two daughters. The spend most of the week living in a $10 million London home and weekend at a Grade II-listed historical estate called Kirby Sigston Manor in North Yorkshire which features a 50 x 16 foot pool that reportedly eats up $20,000 a year just in heating costs.

Out in California, where Rishi spent several years running a hedge fund that had $700 million in assets under management, the couple continue to own a $7 million penthouse apartment in the beach side community of Santa Monica.

According to public financial disclosures, Akshata directly owns 0.93% of Infosys. When the Sunday Times released its annual Rich List earlier this year, the newspaper pegged the couple’s combined fortune at 730 million pounds, which at the time of publish was worth around $930 million USD. The paper ranked Rishi and Akshata as the 222nd richest people in the United Kingdom.

In the last month and a half, the value of the British Pound against the US dollar has plummeted to historic levels, thanks largely to Liz Truss’ aborted economic plans. As such, the dollar-equivalent value of Rishi and Akshata’s fortune has also dropped. Furthermore, the the market cap of Infosys today is about $30 billion less than it was at the very beginning of 2022.

If we travel all the way back back to Jan/Feb/March 2022, Rishi and Akshata were US dollar billionaires on paper. At that time, not only was the value of the British pound around 30% higher against the dollar but the market cap of Infosys was $110 billion as opposed to current $77 billion. At that level, Akshata’s 0.93% stake was worth almost exactly $1 billion.

Richer Than The King

Even at today’s somewhat deflated $800 million net worth, when Rishi Sunak is $200 million richer than King Charles.

Charles was worth around $100 million before becoming King thanks entirely to a real estate trust called the Duchy of Cornwall that exists to benefit the heir to the throne. Upon becoming King, he ceded the Duchy of Cornwall trust to Prince William and took over his late mother’s estate. An estate that is generally valued in the range of $600 million.

Never in history has the sitting British monarch been less wealthy than the Prime Minister. It’s almost unfathomable. In the last century British Prime Ministers have elusively been nonmillionaire lifelong public servants who go on to earn fortunes AFTER leaving the office. For example, Tony Blair was nowhere near a millionaire when he was PM. Blair earned 99% of his current $60 million fortune in the years since leaving office.

So assuming Rishi Sunak is victorious, one can imagine that at some point in the next few days he will be sitting across from King Charles at Buckingham Palace asking permission to form a government… from a guy he could buy and sell with a couple hundred million leftover. Lisa Marie Presley died too young at age 54 last month, and a new documentary about the singer’s life reveals details about her estate. “Lisa Marie Presley: Unending Tragedy,” the latest installment of the “TMZ Investigates” documentary series, claims that Presley took out as many as three life insurance policies which have now left her… Tom Brady is not having a great year. His season with the Bucs has been a flop. The team is currently 4 and 5. That’s 4 wins and 5 losses. In the last few months he separated from then divorced Gisele Bündchen. He’s had to split up what was a really impressive property portfolio, including… It’s a movie that countless high school students have been shown in English class over the years, but now the 1968 version of “Romeo and Juliet” is the subject of a huge lawsuit against Paramount filed by the film’s two young stars Leonard Whiting and Olivia Hussey, who were teenagers when they appeared in the…