If you could turn back time, you could have bought the undeveloped land underneath Cher’s Malibu mansion for $3 million. That’s how much the singer paid for the property back in 1989. Wondering how much that’s equal to in today’s dollars? Don’t worry. I got you babe. It’s the same as $7.2 million. Do you believe in jumbo loans and huge monthly mortgage costs? I sure hope so! Because unless you have $85 million in cash, you’re going to need some financing.

Song title puns aside, Cher bought the dirt on-which her mansion now sits in 1989 for $3 million. She hoped to build a lavish Italian-villa-inspired estate with a tennis court and very tall security walls on the property. “Not so fast,” said the notoriously-difficult Malibu planning commission.

The myriad obstacles thrown up by Malibu’s planning commission caused Cher to wait FIVE years before she could break ground. She then spent another five years actually building what eventually became a 13,000 square-foot mansion with an absolutely stunning clifftop pool overlooking the ocean.

Before approving her plans, one thing the commission absolutely rejected was the 10-foot wall Cher planned to place around the property. They insisted the walls be not one inch taller than the city’s seven foot maximum height.

Cher completed construction on her opulent villa in 1999. Soon after completion, a Malibu planning commissioner was driving by… it’s hard NOT to drive by Cher’s house if you go anywhere in Malibu. As you can see in the photo below, the driveway is literally right on the PCH. Something struck this commissioner about the walls as he drove by. They seemed… taller… than seven feet.

An inspector was promptly dispatched with a measuring tape.

A legal battle ensued. At first Cher argued she needed the walls to keep out stalkers. Next, she took the position that the walls were actually doing Malibu favor by keeping PCH drivers safe from errant tennis balls flying onto the busy road.

The legal battle was appealed and appealed until finally, in August 2003, Cher and Malibu came to a compromise. In exchange for a $125,000 donation to California’s public schools, Cher was allowed to keep her walls.

Below is a photo of Cher’s absolutely ridiculous Malibu mansion which, according to the Wall Street Journal, can now be yours for $85 million. See the wall along the far side of the tennis court? 10 feet. 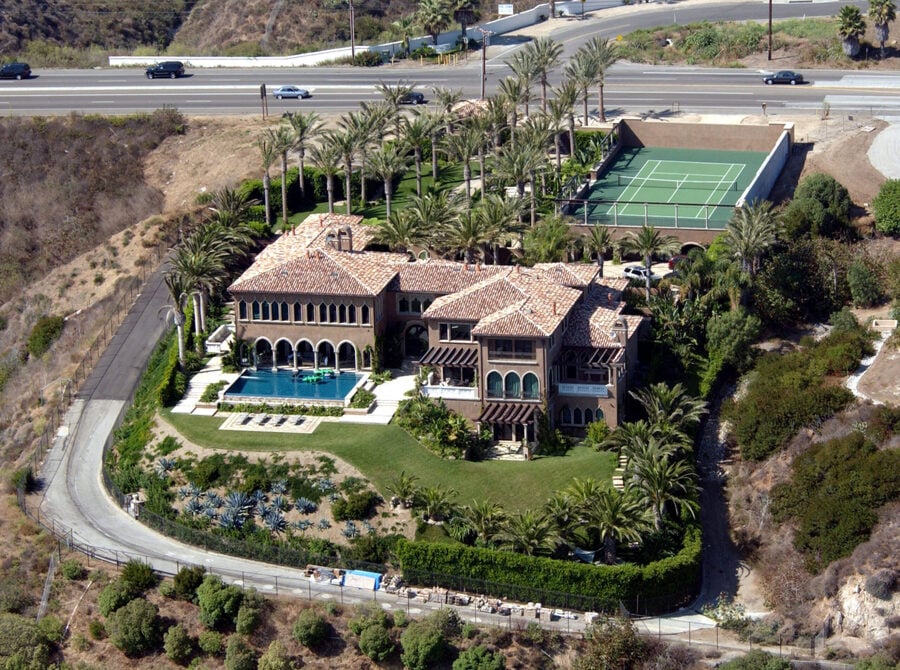 If you do buy Cher’s Malibu mansion, you will be acquiring a 13,000 square-foot main house that has seven bedrooms. The master bedroom has a meditation room and two closets – one of which is currently used as a panic room.

Speaking of the guest house. Back in 2018 Ventura County police swarmed Cher’s Malibu mansion to arrest a 23-year-old man who was living in the guest house. The person that was arrested was accused of dealing drugs, specifically supplying fentanyl, to users around Ventura and LA counties. One of his alleged customers died from an overdose. The accused dealer was apparently the nephew of Cher’s longtime assistant. At the time police issued their search warrant, Cher was in Australia on tour.

This is actually the second time Cher has attempted to sell her Malibu villa. She quietly shopped the property in 2008, pre-global recession, for $45 million. After the world fell apart in late 2008/early 2009, there weren’t very many people on the planet who could afford spending that much money on a home. Jennifer Lopez’s love don’t cost a thing, but her 8-acre Bel Air estate will cost you $42.5 million. What do you get for $42.5 million? Easily one of the most stunning celebrity compounds I’ve ever seen. Among the unique features: An absolutely incredible raised infinity pool, 30-seat movie theater, guest cottage, a lake with a… A huge Beverly Hills estate that was until very recently the property of TV and radio personality Ryan Seacrest has been sold for $51 million, reports TMZ. And the sale also marks Seacrest’s farewell-for-now to the whole Los Angeles area, since it’s reportedly the last of his major real estate holdings in the city, as… The Manhattan penthouse that belonged to the late Ivana Trump, resplendent in its gold and leopard print interiors that loudly proclaim it as the residence of a member of the Trump family (albeit by marriage), has been listed for an asking price of $26.5 million. Stepping inside the five-story penthouse’s gold entryway is “like stepping… The Beverly Hills “starter mansion” purchased by Kylie Jenner and Travis Scott about four years ago is going up for sale. And if they manage to find a buyer at the listing’s asking price of $21.9 million, they will be making a very impressive profit compared to the relatively paltry $13.45 million they spent on… It turns out that the late Bernie Madoff’s name is mud on the real estate market, too. Or at least that’s one possible explanation for why the owner of his former estate in the Hamptons has been trying off and on for four years to find a buyer for it, most recently listing it for…