What Is Alexa Ray Joel’s Net Worth?

Alexa Ray Joel was born on December 29, 1985, in New York City. Her parents, Billy Joel and Christie Brinkley, gave her the middle name Ray to honor musician Ray Charles, who Billy collaborated with on the song “Baby Grand.” Alexa’s parents divorced in 1994, and she has four half-siblings: Jack and Sailor from Christie’s marriages to Richard Taubman and Peter Cook, respectively, and Della and Remy from Billy’s marriage to Alexis Roderick. Billy’s 1993 song “Lullabye (Goodnight, My Angel)” was written for Alexa, and she has said that it’s her “favorite song of his.” Joel began writing and composing songs at an early age, and she told “American Songwriter” in 2007, “The art of finishing a song didn’t really come until I was 15 or 16. That’s when I started to get more serious with the piano and I was still taking classical piano lessons and had gotten fairly good at it, somewhat intermediate level at that point, and that really shed a new light for me on writing songs.  But there wasn’t any really definitive point where I really started writing, because I grew up with my Dad and was constantly surrounded by music, and we were always singing together, so there was always creative energy around the house.” When she was 17, Alexa attended the five-week Music-Fest workshop at Berklee College of Music, and she later studied at New York University and the Lee Strasberg Theatre and Film Institute.

In 2005, 19-year-old Alexa put a band together, and her first live show took place at Maxwell’s in Hoboken. The following year, she played close to 100 shows, including a tour of Hard Rock Cafe locations. In August 2006, Joel released her debut EP, “Sketches,” which featured six songs, and she designed the cover. “AllMusic” reviewed “Sketches” and called Alexa “one of the best second-generation rockers to yet emerge.” The reviewer, Stephen Thomas Erlewine, said that the EP consisted of “tight, melodic, catchy songs that are as classically constructed as her father’s without sounding much like his work” and that “after hearing this, it’s hard not to want to hear Alexa Ray Joel over a full album.” In 2007, Joel performed at the Bonnaroo Music & Arts Festival, New Orleans Jazz & Heritage Festival, and Albany Riverfront Jazz Festival, and in 2008, she performed with her father at the Rainforest Foundation Fund Benefit Concert, which was held at Carnegie Hall. Alexa has performed at many charity events, such as the 2008 Stage For The Cure” benefit and “Save Sag Harbor” benefit, the 2009 “Art of Elysium” benefit, and 2010 benefits for Habitat for Humanity and St. Jude Children’s Research Hospital. She also performed the song “Baby Grand” with her father at a 2008 fundraiser for Barack Obama’s presidential campaign. 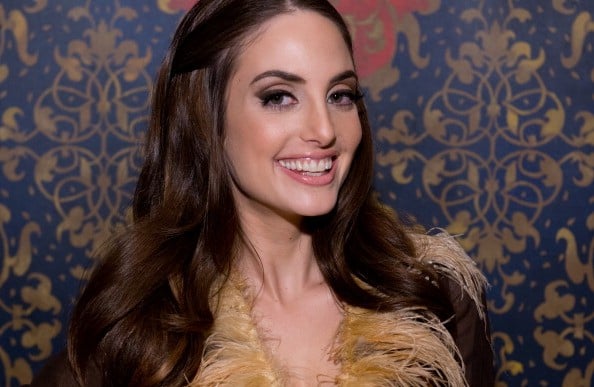 Joel performed her single “Invisible” on the syndicated series “The Wendy Williams Show” in 2009, and in 2010, the Sirius XM Hits 1 channel listed her single “Notice Me” as a “Hit-Bound song.” “Notice Me” was her first release after signing with OCD Music Group/The Hang Productions. Alexa did residencies at New York City’s Café Carlyle and Oak Room, and she released the singles “All I Can Do Is Love” and “Beg You to Stay” in 2011. In 2013, she starred in a Gap ad campaign in which she covered her father’s song “Just the Way You Are.” Joel is also interested in fashion, and she performed at “Fashion’s Night Out” in Manhattan in 2009, 2010, and 2011. She interviewed designers for Julib.com, a social networking website, during New York Fashion Week in 2012 and 2013, and she performed at a book release event for Bobbi Brown’s “Pretty Powerful: Beauty Stories to Inspire Confidence” in 2012. In 2018, Alexa graced the cover of “BELLA” magazine’s “Beauty Issue.”

In December 2009, Alexa was rushed to the hospital after taking several Traumeel pills. Six months later, she told ABC News that she had been upset about a break-up with her bandmate Jimmy Riot, who she had been in a relationship with for four years. Joel stated, “I was genuinely, so distraught, and in so much pain. It was near the holidays. I was upset. I don’t want to like call and bother anyone with this anymore, ’cause I’m so sick of this pain, let me just, go to sleep.” She added, “It ended up making me feel kind of sick, and then I panicked and I was just not thinking clearly. It kind of bothers me, that the press calls this an overdose…. Did I actually want to die? Absolutely not. I was not suicidal.” In 2010, Alexa underwent surgery to correct a deviated septum, and she told “People” magazine, “I was thinking about getting this for years. [My nose] always bothered me a little bit. I was self-conscious of pictures taken from the side. To some people that’s vain, but at the end of the day, we all want to feel pretty.” Joel began a relationship with restaurateur Ryan Gleason in 2013, and the couple became engaged on New Year’s Day in 2018. What Is Jennifer Nettles’ Net Worth? Jennifer Nettles is an American country music singer, songwriter, actress, and record producer who has a net worth of $20 million. Jennifer Nettles is best known as the lead vocalist of the duo Sugarland (along with Kristian Bush), and she has had a recurring role as Aimee-Leigh Gemstone on… What Is Alison Krauss’ Net Worth? Alison Krauss is an American singer, songwriter, and musician who has a net worth of $18 million. The winner of more than 40 Grammys, Alison Krauss is best known for her work in the bluegrass and country genres. Alison has released six studio albums with Alison Krauss & Union… What is Brett Young’s Net Worth? Brett Young is an American country music singer and songwriter who has a net worth of $3 million. Brett Young had his commercial breakthrough in 2016 with his self-titled six-song EP. From the EP, he had hit singles with “Sleep Without You” and “In Case You Didn’t Know.” Young… What is Diana Krall’s Net Worth? Diana Krall is a Canadian jazz pianist and singer who has a net worth of $20 million. Having sold over 15 million albums worldwide, Diana Krall is also the only jazz singer to have had eight albums debut atop the Billboard Jazz Albums chart. Winners of multiple Grammy and… What is Labrinth’s Net Worth? Labrinth is an English singer-songwriter, musician, and record producer who has a net worth of $6 million. Labrinth rose to fame in 2010, first as a featured artist on Tinie Tempah’s hit single “Frisky” and then with his debut solo single “Let the Sun Shine.” He went on to have…